The winner of LToN back on the top

Reigning Ladies Tour of Norway-winner Marianne Vos (Waowdeals Pro Cycling) is back on the top after having broken her collarbone earlier this spring. The Dutch superstar finished 2nd in last week’s World Tour-race OVO Energy Tour in Great Britain.
Even Emilie Moberg (Team Virtu) was back after her nasty crash in China, and she is now on track for her home races Ladies Tour of Norway.

Both Emilie and Susanne Andersen (Hitec Products) showed themselves on the last stage, sitting in a dangerous break, initiated by Emilie Moberg. But they were caught up and the stage went to another well known rider in the Ladies Tour of Norway – Finnish champion Lotta Lepistö (Cérvélo-Bigla). It was her first win of the season, and she is also back after injury. Hopefully we’ll se Lepistö at the LToN again in August.

But it was the American supersprinter Coryn Rivera (Team Sunweb) who won the race with 11 seconds before Marianne Vos. Rivera has not been riding the LToN, but maybe she’ll turn up in Norway this year.
Rivera also won the sprint jersey, while Marianne Vos won the points jersey and her Waowdeals Pro Cycling won the teams classification. Elisa Longo Borghini (Wiggle High5) won the mountain jersey and Danielle Rowe (Waowdeals) was the best Brittish rider. 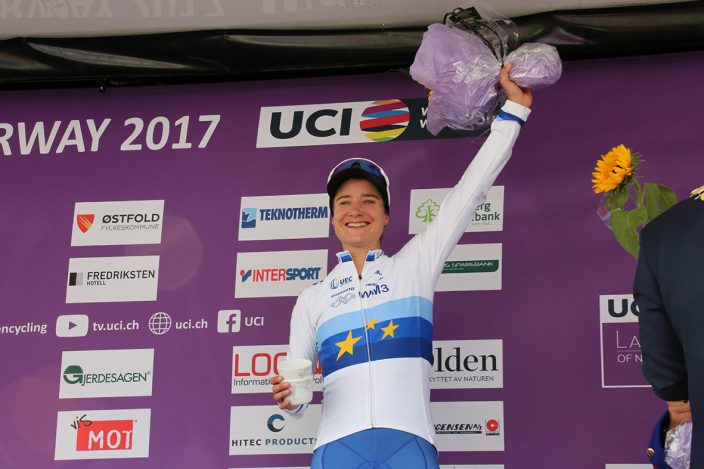 MARIANNE VOS (Waowdeals Pro Cycling) is celebrating her victory at the Ladies Tour of Norway 2017. She is now back after injury and finished a strong 2nd in the last World Tour-race, OVO Energy Tour i Britain. Foto/rights: MARCELA HAVLOVA/KEK-stock

The Womens World Tour is getting closer to Norway and the LToN from the 16th. to the 19th. of August. But first up is the Giro Rosa in Italy 6-15 July – the ladies own Giro d’Italia.
The Olympic champion Anna van der Breggen (Boels-Dolmans), who won the first edition of LToN, did not race the OVO Energy Tour this year, but she’s still holding on to the lead in the overall WWT.