The Olympic voice at Ladies Tour

He is called ”The World’s best announcer” and his CV is not to be matched by anyone in the world. Kjell-Erik Kristiansen is at home when he takes the mikrofon for the third year running at LToN. A lot of the cyclists will recognize his voice from last years World Championships in Bergen and for hundreds of races in Norway and ten years as a commentator for Norwegian Eurosport. 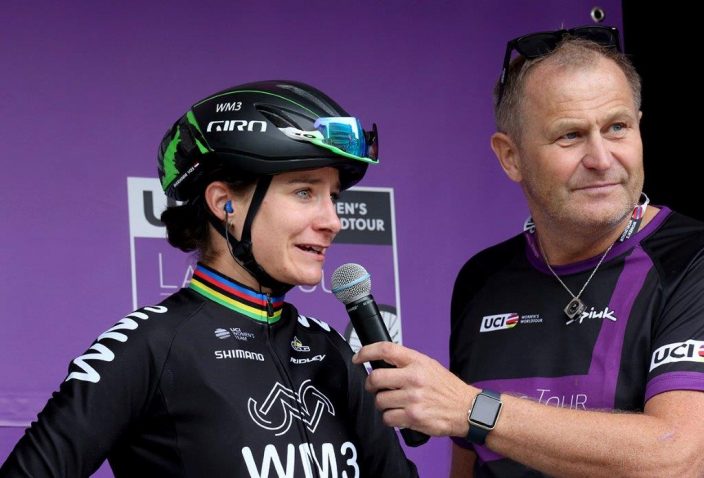 – It’s really fun to get to work with such a big event at home, says the famous announcer from Mysen.
– I’ve been an announcer in 21 different countries and I’ve been doing this for more than 30 years, but it’s very seldom I get to work at home.
And despite 22 years living outside Norway the region of Østfold is home to Norway’s most famous sports announcer. He is raised in Mysen and he came back to Norway some years ago after 15 years in Sweden and 7 years in Finland.

– But it has costed a lot, I do soon have a family i every Nordic country, says Kjell-Erik, who also has a daughter who is a member of the Swedish national cross country skiing team and one who is an active gymnast in Finland.
– But I love my job, it’s more of a lifestyle than a job. Of course it’s hard to travel around 200 days a year for such a long period, but it helps to get to work with something you really love.

It all started with a coincidence through the sport of orienteering at home in Mysen. And it quickly developed through the World Championships skiing in Falun, Sweden 1993 and the Olympic Winter Games in Lillehammer 1994.
– Now I’ve done 8 Olympic Games, soon 50 World Championships and a bit over 500 World Cup-races in different sports. It’s a fantastic job, I love the excitement and the drama, says the man who is known as ”The Nordic voice” in cross country skiing and biathlon, the two sports he’s been working most with.
– But cycling has always been close to my heart after the family spent two months every Summer in Spain from I was 8 years. I got the taste of Tour de France and later I’ve got to comment the race 10 years at Eurosport beside all the other big races in the world.

Last year he was the announcer for the World Championships in Bergen and meet a lot of the ladies taking part in this years Ladies Tour of Norway.
– It’s special for me with a finish in Mysen again. It’s a little bit me who took the race to this area. The two last years I’ve been a project manager for LToN with my main areas in media and TV-production, says Kjell-Erik, who has also moved his business from Sweden back to Norway.
– Yes, I started a new company in Norway this year, with two others – one being the race director Roy Moberg. We’re working a little more with developing events, media and management than I’ve done before. I feel I do have something to share after 30-35 years in the business and there are not many others knowing as many people in the different sports in Norway than me, says the 58 years old laughing.

And Kjell-Erik is like a potato, you can use him for everything – always prepared. In February he was the voice of the Olympic stadium for biathlon in Pyeongchang, Korea. Last week he did the World Championships logging (chainsaw) and he’s been working with armwrestling, bodybuilding and trotting. But the favorites are skiing, biathlon, cycling and orienteering.