Danish Team Virtu is an interesting team in this years Ladies Tour of Norway. Specially because two of their riders are Norwegians: Halden’s own Emilie Moberg and teammate Katrine Aalerud from Vestby, just south of Oslo.
They are the two first Norwegian ladies cycling for a foreign team at this level, and even though the season could have started better, specially Emilie has LToN as a big target.

Bjarne Riis is the man behind Team Virtu, a team both on the ladies and the mens side. The goal is to be the best team in the world, but so far they are in the beginning and building up the team. The ladies haven’t got so many top results this year, except Danish rider Christina Siggaard’s victory in Het Nieuwsblad in Belgium earlier this year. 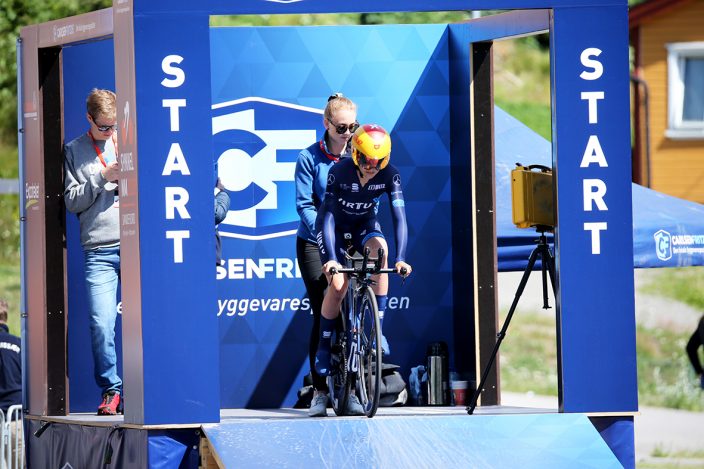 KATRINE AALERUD didn’t have a single result this year before the Norwegian championships in Sandefjord at the end of June. But since then the form has just been better all the time for Katrine. Photo/rights: INKA JULIA KRISTIANSEN/KEK-stock

Katrine Aalerud got injured early this season and she was out for a long period. She didn’t have a result before starting in the Norwegian championships this year. But well there she went in the break of the days with Vita Heine (Hitec Products) who won the race. Katrine couldn’t hang on to the finish, but her form was on the way up and she ended 18th in the Giro Rosa after that.
Here she impressed with a 12th place in the mountain time trial where she beat several of the world’s best riders. 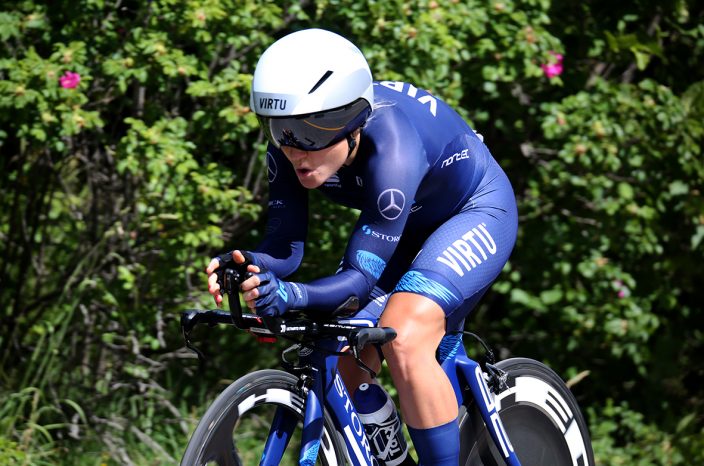 EMILIE MOBERG during the Norwegian championships time trail this year. It was no success, but on home roads in Halden she is expected to deliver at the Ladies Tour of Norway. Photo/rights: INKA JULIA KRISTIANSEN/KEK-stock

Emilie Moberg hit the deck hard in the sprint in one of the stages in the WWWT-race in China. It looked really bad, but fortunately she was back on the bike quite quick. Emilie is lacking the great results this year, but LToN means something special to her. With her father Roy as the man behind the whole race and the family on the sideline she has earlier showed that she can fight in the top just her.
– And I’ve told the teams directors that I want to put something extra into just this race, says Emilie. She has been to two camps at altitude with Olympiatoppen in Norway and the new sponsor for Norwegian women’s cycling, insurance company Tryg. How this will affect the form is still to be seen. During the Norwegian championships Emilie was ”under the ice”, but she will for sure be better prepared for the LToN.

Even though the former World Champion Linda Villumsen (former Danish, now representing New Zeeland) has retired for a second time, Team Virtu have got several strong names beside the two Norwegians.
Polish rider Katarzyna Pawlowska is adding experience and German Mieke Kröger is a powerhouse in time trials. Beside Emilie Moberg the team also has Italian Barbara Guarischi as a strong sprinter. Bjarne Riis probably has a dream of a team with mainly Nordic riders, and therefore Team Virtu today is a home for top riders from both Denmark, Norway and Sweden.

It will be exciting to see what the blue jerseys can make on Emilie Moberg’s training roads near Halden in August.