Norway has not had a female World champion since Monica Valen (Valvik) in 1994. But watch out for 19 year old Susanne Andersen from Stavanger, she has what it takes to become the next Norwegian Queen of cycling. Last weekend she pushed the “queen” Marianne Vos for the victory on the last stage of the BeNe Ladies Tour… 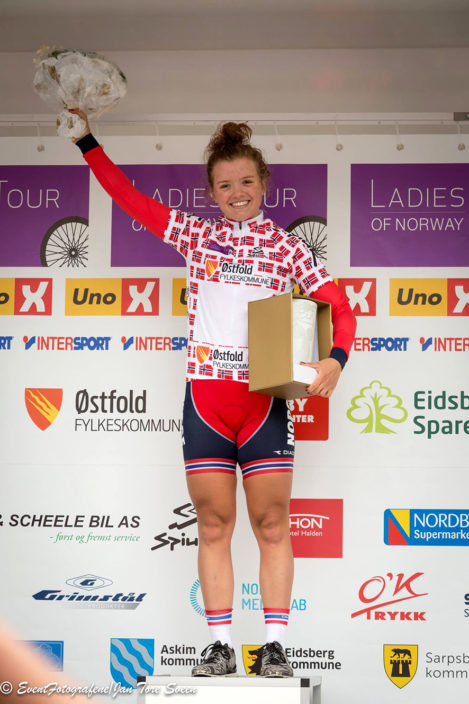 WEARING THE JERSEY as the best Norwegian rider after the second stage of LToN in Sarpsborg 2016. Photo: EVENTFOTOGRAFENE/Halden

Susanne turns 19 the 23. July, and already she follows stars such as Alexander Kristoff and Sven Erik Bystrøm on the roads outside Stavanger.

– I like to train with the boys, says the young talent, who won the bronze medal at the Junior World Championships in Qatar in October. Before getting hit by a local driver on her way back to the hotel. Luckily without serious injuries.

She is now a full member of the Norwegian professional team Hitec Products and has already won respect amongst the big names. Last year she won the sprint in the peloton at the second stage of Ladies Tour of Norway in Sarpsborg, finishing second after GC winner Lucinda Brand. If there had been a U23-race for ladies at the World’s in Bergen, Susanne would definitively be one of the gold favourites.

Now she prepares for LToN, a race that she likes.
– Yes, I really like the roads around here she says, at the same time revealing that she is not fond of the steepest hills.

However, in the sprint she is a challenger to anybody, as demonstrated the last day of the BeNe Ladies Tour. Earlier this Summer she finished 5th in the Norwegian championships, and with both Emilie Moberg and Susanne Andersen at the team, Hitec Products has two cards to play if any of the stages in this year’s LToN ends in a mass sprint.

Last year ended with a 9th spot on GC for Susanne, then riding for the Norwegian national team. Together with Ingvill Gåskjenn from Horten she is the future of Norwegian female cycling – which we are confident she will demonstrate for the TV-audience and all the spectators in Ladies Tour 17-20 of August. 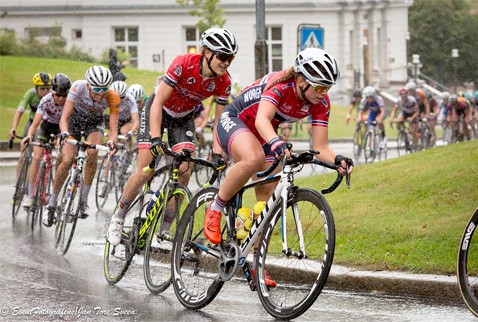 SUSANNE ANDERSEN is a major talent for Norwegian female cycling. Here at the 2nd LToN stage in 2016, where she surprisingly finished second. Photo: EVENTFOTOGRAFENE/Halden