Marianne Vos (WM3) managed to control all the attacks on the final laps of the Ladies Tour of Norway in Halden and she secured the overall victory after a 3rd place in the sprint. But former winner of the race Megan Guarnier (Boels-Dolmans) took the sprint and the stage victory just ahead of Ellen Van Dijk (Sunweb). 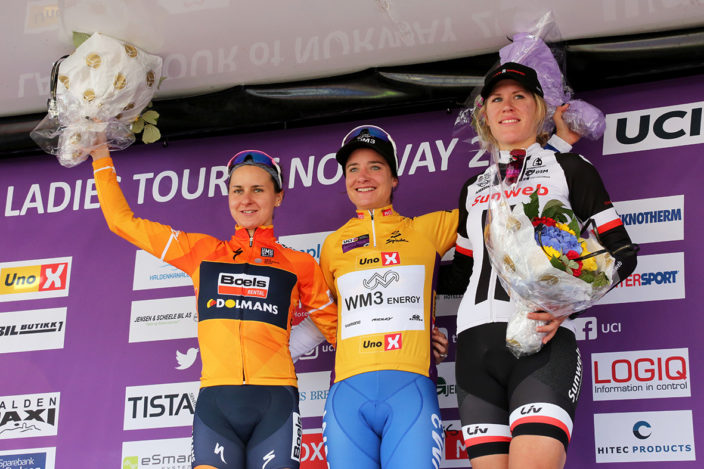 Those three riders were also the podium on the GC, with Marianne Vos winning 13 seconds ahead of both Guarnier in second and Van Dijk in third. Vos took bonus seconds on the two first intermediate sprints and extended her lead.

The last stage of 158,6 km was the longest of the race and the riders were twice on Swedish roads. The second time in Sweden a trio managed to break clear. Lithuanian champion Daiva Tuslaite (Alé-Cipollini), Lisen Hockings (Australia) and Ingrid Moe (Norway) managed to get a gap of over 3 minutes on the main field, but when WM3 started to work they were caught. Tuslaite got some mechanical problems as well.

Rachel Neylan (Orica-Scott) attacked on the outskirts of Halden before the four final laps of 5,1 km each. She managed to stay away untill the penultimate lap. A counterattack from Ellen Van Dijk was the most dangerous and Vos had to work really hard on the last lap to catch her fellow Dutch rider.
In the sprint they were both up there, but the former American champion Megan Guarnier had the best sprint and took the stage ahead of Van Dijk and Vos. 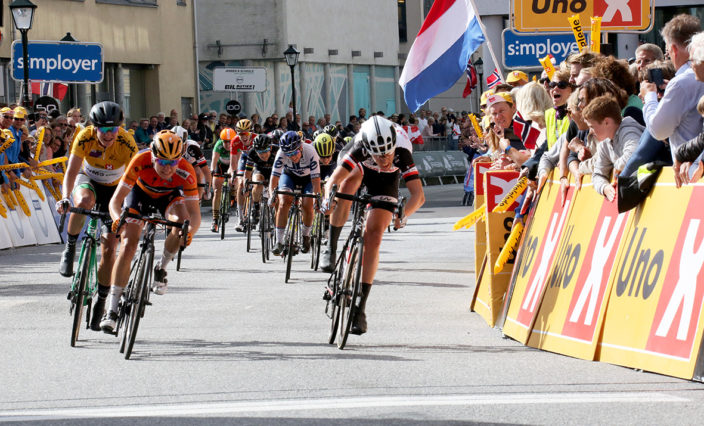 MEGAN GUARNIER (Boles-Dolmans) in the middle just edging out Ellen Van Dijk (right) to win the last stage of the Ladies Tour of Norway in Halden. Behind Guarnier is Marianne Vos in the yellow jersey securing the overall victory. Photo: MARCELA HAVLOVA/sweski.com

21 riders finished in the first group. Marianne Vos also won the green points jersey, while another Dutch rider, Jannecke Ensing (Alé-Cipollini) finised of in style to take the mountains jersey ahead of Rosella Ratto (Cylance).

German champion Lisa Klein (Cervelo-Bigla) was the best young rider, while Susanne Andersen (Hitec Products) got the jersey as the best Norwegian rider. A special borderprize for the first rider into Norway the last time went to Daiva Tuslaite.

Team Sunweb won the team competition. The last stage of the first ever World Tour-race in Norway was seen by a great crowd in Halden and one of the spectators was UCI president Bryan Cookson.