The Moberg’s ARE the Ladies Tour of Norway

Without the Moberg-family from Tistedal outside Halden there would have been no Ladies Tour of Norway. Father Roy Moberg is the man controlling everything and as the race director he is the captain of the ship.
But the whole family is there and daughter Emilie in Hitec Products is the big home favourite. 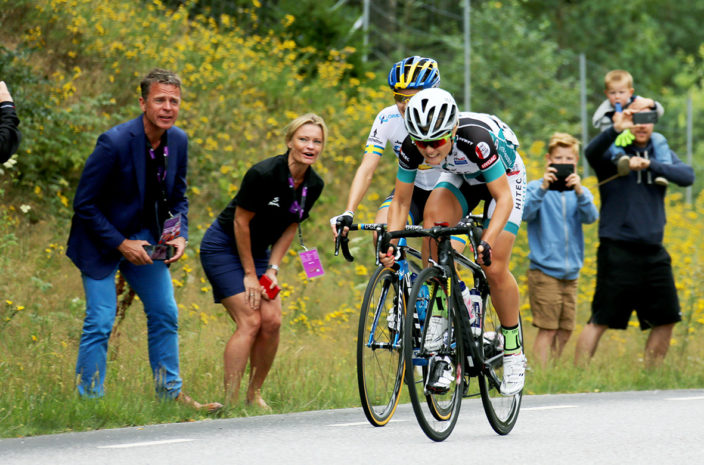 THE MOBERG FAMILY is more than average engaged in the Ladies Tour of Norway. Here is father Roy and mother Gry cheering on their daughter Emilie at the border sprint two years ago. Photo: KJELL-ERIK KRISTIANSEN/sweski.com

Nobody could believe that LToN would go from nothing to World Tour-level in just four years. But it could not have happened without the leader Roy Moberg, CEO/COO of the company Teknotherm/Eagle. He has used most of his free time (and probably a little more) working for the race.
As CEO and co-owner of Teknotherm/Eaglem he is in charge of several hundreds of employees all over the world, but his heart is – and has always been – very good planted within sports. In his own active career it was cross country skiing. Roy got to start once at the 50 km in Holmenkollen and he was one of the best in the region of Østfold.
But Østfold has little snow and is not a big region for skiing (even tough Olympic champions Vibeke Skofterud and Ola Vigen Hattestad are from here).
– I didn’t believe that I should be fighting for womens cycling at that time, says Roy.

Emilie is the star
But his daughter Emilie is today one of Norway’s best female riders and that has of course made daddy interested as well. Roy was missing a female race at high level in Norway, so together with some other cycling fans in Halden they started the Ladies Tour of Norway in the small four years ago.
– We have been lucky and got the best riders here every year. This has helped the marketing and we’ve got a reputation as a good organizer, says Roy today.
And suddenly we do have the Ladies Tour of Norway at the highest level with World Tour status for the first time. Live TV-coverage and a budget of more than 6 mio NOK – most of it fixed by volunteers.
The race is of course something extra for Emilie Moberg with the course more or less just outside her living room. It gives extra motivation and the two last years she has been on the podium on the final stage in her hometown of Halden. This has been notified by the inhabitants and the number of spectators have increased every year.
And when Emilie’s co-habitant Sondre Sørtveit got injuried and had to give up a promissing career at the Norwegian Joker-team, ”father-in-law” Roy did not waist much time before he got Sondre into the role as technical director of the race. So today Sondre is the man standing up in the first car, hoping to see his girlfriend crossing the line first!

Mamma is fixing the hotels
Emilie’s mother Gry is also occupied when LToN is coming to town. Together with Astrid Brøchner she is responsible for the logistics. A challenging task with hotels for all the teams, leaders, media, helpers and others for the cycling days in Halden and the surroundings.

Emilie’s uncle Kent is responsible for the banners in the finish area and he has several hundreds of meters with advertisement to be put up every day. 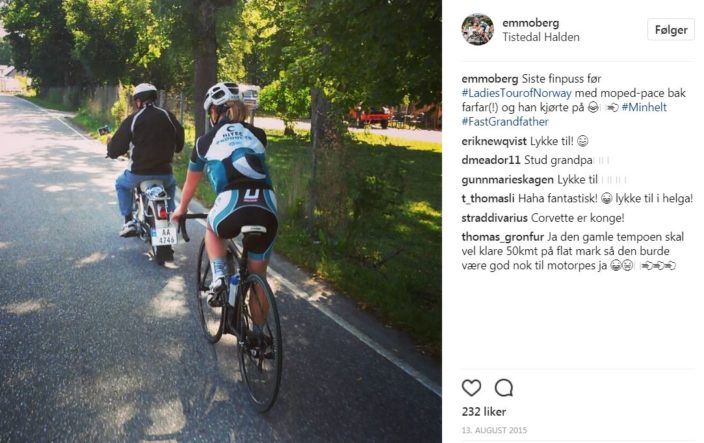 As for example driving pace – which Grandpa is an expert of:)