Marius Jørgensen is the man with full control of all the signs for the Ladies Tour of Norway. With two full trucks and a lot of helpers he is a very important man in the organisation as the area manager.
And Marius is good – so good that he also has the same job also at the World championships in Bergen i September. 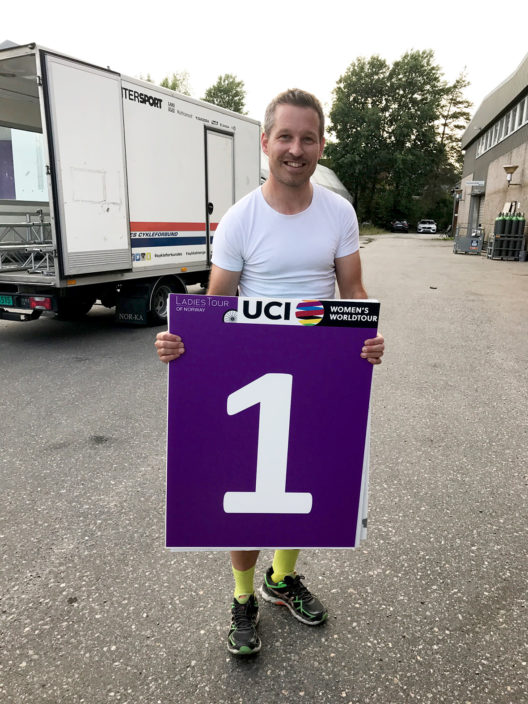 MARIUS JØRGENSEN is number 1 when it comes to signs, parking, electricity, internet and everything connected to the venues. He is doing the same job for the World Championships in Bergen i September. Photo: KJELL-ERIK KRISTIANSEN/sweski.com

– In Bergen will need more than 40 km of fences to cover the courses. That will fill three big ferrys from Fjord Line bringing them from Denmark, says Marius, who is originally from mid-Norway, but is now based in Asker just outside Oslo.

This week the focus is on the Ladies Tour of Norway and during Wednesday evening all the material arrived in Halden – signs, stages, trucks, etc.
But for Marius Jørgensen the job started several months ago. He has been controlling the start- and finishing areas several tmes. And it’s not only about signs, but also electricity, internet and parking possibilites. Today there are a lot of things you need to fix to have such a big event as a World Tour-race.

After last years LToN Marius took a chance and quit his normal job to as the ”general of the signs” in Østfold and Bergen. Now he hopes that this work will give him more oppotunities in the future. 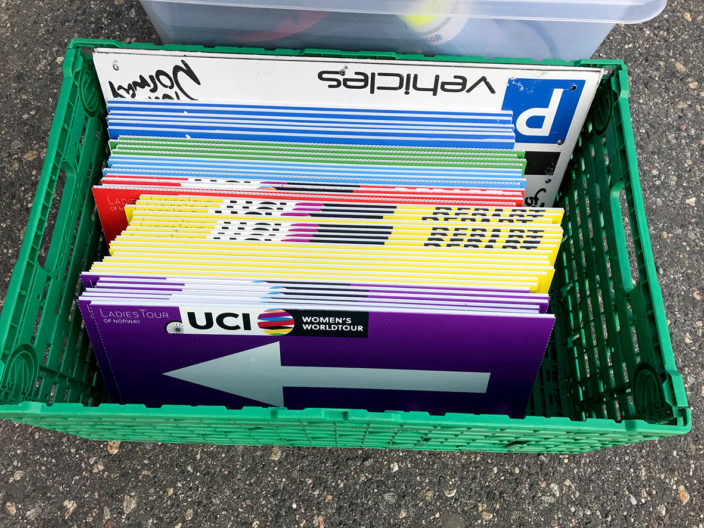 THERE ARE TONS of signs ready to be put out on the roads of Østfold for these days Ladies Tour of Norway. Photo: KJELL-ERIK KRISTIANSEN/sweski.com

And the result will be good, we’re confident in that. Marius Jørgensen is a man who puts his soul in doing everything a little better than everybody else – he wants people to remember the events where he was responsible for rigging the venue.

But there is no use trying to call Marius to next four days. He is working around the clock and it’s good that nobody really checks how many hours he and his crew are hands on this week. They’re probably breaking all laws regarding what is allowed to work… 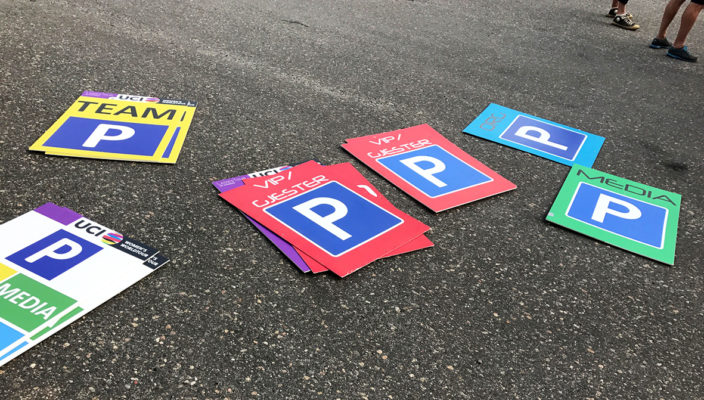 THERE ARE TONS of signs ready to be put out on the roads of Østfold for these days Ladies Tour of Norway. Photo: KJELL-ERIK KRISTIANSEN/sweski.com