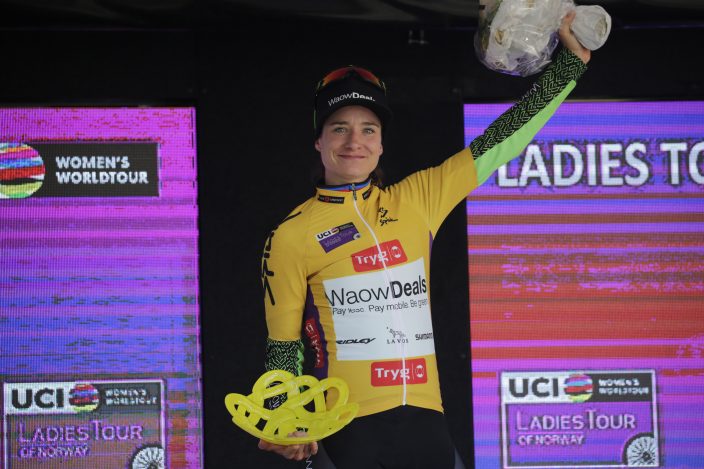 Last years winner and three times World Champion Marianne Vos won both the stage and took the overall lead in the Ladies Tour of Norway on Fridays 1st stage over 127,7 km between Rakkestad and Mysen. But it was a close call and lone breakaway-rider Karol-Ann Canuel was close to hold of the chasers all the way to the line. Vos won both the intermediate sprints and did a great stage.

– Last year I didn’t make any good result here. I was to far behind into the uphill finish. But I learned something from that and now I was in a better position, even though it was very unsure if we should catch Karol-Ann, says Vos who just managed to edge out the Swedish champion Emilia Fahlin with a few centimeters.

A lot of win and a lot of hills caused a lot of splits in the peloton on this first stage. Finally 33 riders got a gap between Spydeberg and Askim and Canuel went away before the final two laps and got a gap of over 1 minute.
Floortje Mackaij tried to get up to her, but she couldn’t make it. Instead it was Mitchelton-Scott with Annemiek van Vleuten and Amanda Spratt who tried to reel in Canuel to set it up for Grace Elvin in the sprint. 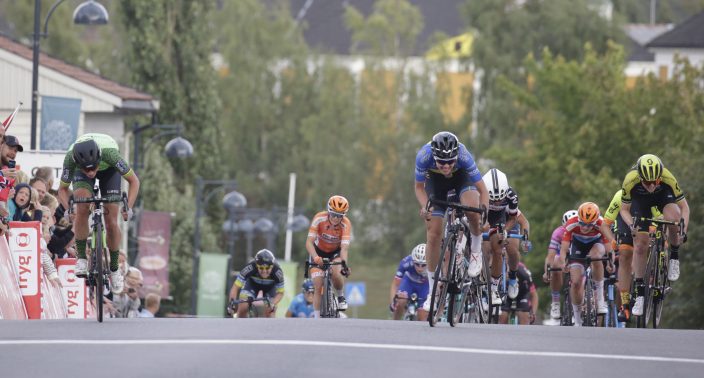 But when the riders came in on the uphill finish Marianne Vos had placed herself in a perfect position. And its the victory on the stage and both of the intermediate sprint the reining champion has taken the grip of the race even with two stages left.
Katarzyna Niewiadoma has the KoM jersey, while Italian Chiara Consonni from Valcar PBM is in the lead of the best young rider competition. Susanne Andersen was the best Norwegian, but none of the home country’s riders could follow the 33 who went clear on the final 50 km.

Saturdays stage between Fredrikstad and Sarpsborg is flatter but could also get a lot of wind. The queen stage is Sunday’s final to Halden, going in and out of Sweden several times.