Look out for Belgian sprintspecialist

Jolien D’hoore – put the name on your memory!

This might very well be one of the most exciting riders in this years Ladies Tour of Norway. The four times Belgian champion is en excellent sprinter who might figure in the top of this years World Tour-race in Norway together with her strong Wiggle High5-team. 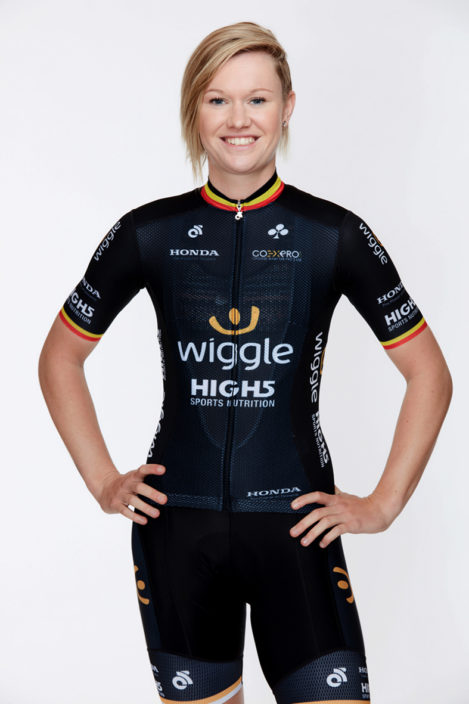 D’hoore won her fourth Belgian national title in this years championships, but she has won much more than that. Only this year she has won the Omloop van het Hageland-Tielt-Wing (1.1(), Grand Prix de Dottignies (1.2), Tour of Chongming Island (2.WWT), 1 stage in the OVO Energy Women’s Tour (2.WWT) and 1 stage in the Giro Rosa.
Her last result is a 6th place in theWorld Tour-race RideLondon.

The 27 years old has won the Flanders Diamond Tour three times, the BeNe Ladies Tour twice and last year she won the Madrid Challenge by La Vuelta. In 2015 D’hoore won the World Tour-race in Vårgårda, Sweden – taking place the week before LToN this year – and she won the Boels Rental Ronde van Drenthe.Jolien D’hoore’s professional carrer startet at Topsport Vlaanderen in 2008, a team she represented until after 2012. After that she spent two years at Lotto Belisol Ladies before she went to Wiggle Honda in 2015, the team later being renamed Wiggle High5.

She started cycling at the age of 12 after having done atheltics since she was 6 years old. Jolien has always had a big talent for sports and she won the Junior World Championships on the track in South Africa in 2008. She was only 18 years old when she became professional at Topsport Vlaanderen.

Beside the cycling she has taken an education in physiotheraphy. D’hoore won her first Belgian national title in 2012, a victory she repeted both in 2014 and 2015 – and also this year. In 2016 she won the bronze medal.

In her first season with Wiggle High5 she was the most winning rider on the team with 13 UCI-victories, among these two World Cup-races. Her best season was 2016 when she won an Olympic bronze in Omnium in Rio de Janeiro and a gold medal in Madison at the European championships.

Jolien D’hoore will head a very strong Wiggle High5-team for the Ladies Tour of Norway. Her helpers will be the very experienced Italian rider Giorgia Bronzini, the strong helpers Audrey Cordon Ragot from France, Annette Edmonson of Australia and the German rider Claudia Lichtenberg as well as the former Hitec Products-rider Julie Leth from Denmark.
That means that the Swedish team member Emilia Fahlin, who won the World Tour in Vårgårda last year, ”only” is on the list of substitutes so far.