Ladies Tour of Norway is upgraded to Women’s World Tour 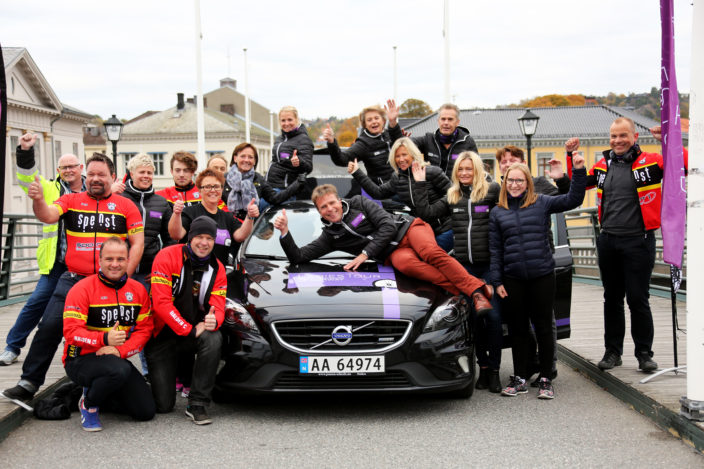 – WELCOME to the Ladies Tour of Norway 17.-20.August 2017, says some of the organisers in Halden, one of the host cites. Race director Roy Moberg on the front of the car. Photo: KJELL-ERIK KRISTIANSEN

– This must be one of the quickest ways to the World Tour ever, says race director of Ladies Tour of Norway (LToN), Roy Moberg.
After just three years the race reaches the top level of international cycling in 2017. That means live TV coverage and all the best ladies on Norwegian roads between 17-20 of August next year.

This will be the first ever whole stagerace at World Tour-level in Scandinavia. With the exception of the three first stages of Giro d’Italia in Denmark 2012, there has never been a whole race at this level, neither in Denmark, Sweden, or Norway.

– We started up three years ago in the town of Halden, and have taken steps every year. This summer we spread out to most of the Østfold region south east in Norway, and we plan to stay in this region also next year, says Moberg.

– We do have great support both from the state and the region as well as local communities and sponsors. We have already started planning the stages for 2017, aiming at presenting them before Christmas, says the race director.

In 2017 there will be one more day of the races, making it a total of four stages. The first stage will be a short prologue, probably in the town of Halden, where the race was born in 2014.

Roy Moberg, together with Heidi Stenbock-Haakestad initiated the race. Much thanks to his dotter Emilie Moberg being the best female cyclist in Norway. In addition to Emilie, LToN has already seen famous winners such as Anna van der Breggen, Megan Guarnier and Lucinda Brand.

– Next year, LToN is the last major race in Norway before the World Championships in Bergen in September, so I think all the best ladies would be interested in testing the Norwegian roads at this time, says Moberg

Live on TV in Norway
Being a rather new race, and a women’s race, Ladies Tour of Norway has so far not attracted the same media attention as the three big Norwegian stageraces for men; Tour of Norway, Tour des Fjords and Arctic Race of Norway. But this will change in 2017.

– We have a deal with the Norwegian broadcaster TV2, saying they will send the race live on their main channel, just as they do with the men’s races. This means a lot for us and it will be a total different ballgame when it comes to coverage.

And, as Ladies Tour of Norway now is included in the Women’s World Tour, Roy Moberg is confident that the race will be broadcasted in other countries as well.