Ladies Tour of Norway to the top in 4 years

Ladies Tour of Norway, taking place in August, is a newcomer in the Women’s World Tour with its 4th edition of the race. In record time the race in the Norwegian region of Østfold has reached the top level of international cycling and is in fact the first ever World Tour race in Norway.
Behind the idea is the strong man Roy Moberg, leading the work under the device “In it to spin it”. 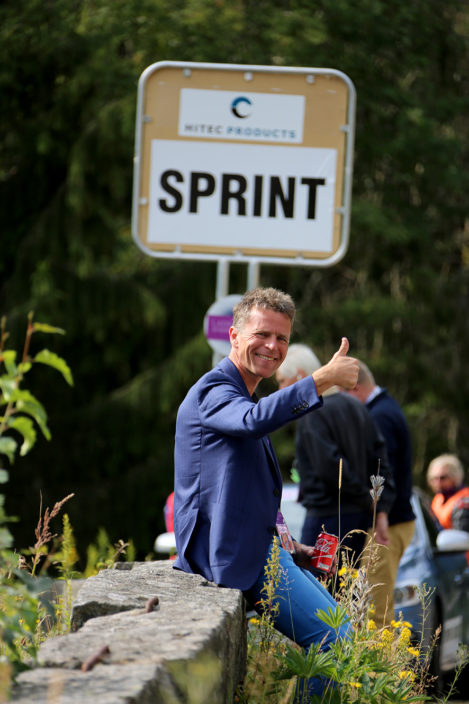 From the tiny start 4 years ago there are now four days of races, with a budget of more than NOK 6 mill, live TV-transmissions and all the world’s best ladies participating. Behind this there are thousands of hours of work – most on voluntary basis.

– We have a very good reputation in the international field and I think we are renowned as a professional and able organizer, says Moberg, who was a cross country-skier himself. Being the father of Emilie, one of Norway’s best female cyclists, the CEO of Teknotherm in Halden has turned his focus to ladies cycling.
– In Norway we have witnessed an explosion in the interest for cycling the past decade, but so far the ladies are lagging behind. Men and women cycling, like many other sports, still differ in their media attention.

Roy Moberg however is confident that we now see the beginning of something big. Of course, having a female equivalent to Thor Hushovd, Alexander Kristoff or Edvald Boasson Hagen would be most helpful in reaching the headlines, but live transmission on TV2 will make a big difference in reaching a wider audience. This will help making the cycling audience familiar with the top female athletes as well.
– I recently visited the ”Giro Rosa”, Moberg continues, and all the best female cyclists ensured me that they are really looking forward to coming to Ladies Tour of Norway in August.

Growing out of Halden
LToN – the short name of the race – started with the border city of Halden as a base. In its fourth year it has evolved to becoming a project for the whole county of Østfold, having the county government as one of the main sponsors.

– We do get enormous support from both the state and the county government, as well as from the communities and cities along the course, says Moberg, who has seen a tripling of the budget from last year’s race.
– The main reason for the increase is a rather costly TV-production. And of course, the logistics of moving from city to city each day also comes at a cost.
This year the stage finishes are in the cities of Halden, Mysen and Fredrikstad, while the starts are hosted by Halden and Sarpsborg. Actually, the last stage starts outside Halden centre, at the border bridge between Norway and Sweden.
– We did this also the first year. Starting with half the field in Norway and half in Sweden must qualify as a rather exclusive start. This year we have designed a new and interesting stage from the border bridge, crossing the border another three times before ending up in Halden again. 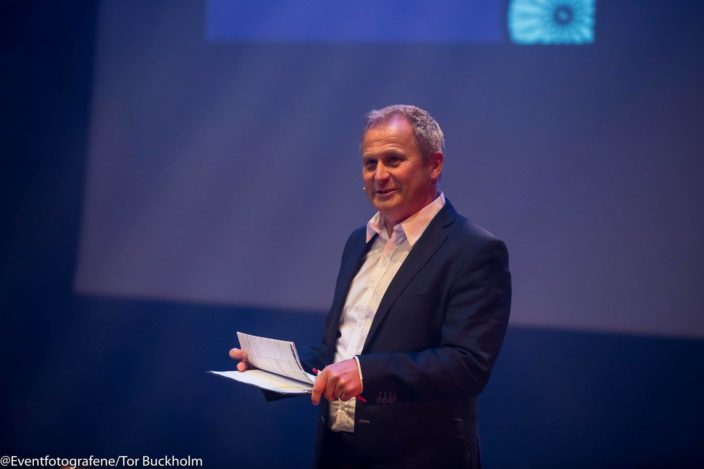 Most of the work with the race rests on volunteers, but one who works the year around with LToN is the project manager Kjell-Erik Kristiansen, well-known Olympic and WCH-announcer and TV-commentator.

– We are taking one enormous step this year. The race will be transmitted live on the Norwegian broadcaster TV2 on Friday, Saturday and Sunday – just like the men’s races in Norway (Tour of Norway, Tour des Fjords, and Arctic Race). We have the same production with all the same equipment, says Kristiansen, who will also be the announcer for LToN – as he will be at the upcoming World Championships in Bergen in September.
– National broadcasting is an important part of it, but there is more. We have sold the TV-rights to America, and the rest of the world can see the event live at UCI:s internet-channels. In this way, we cover the whole world, with a potential of many millions to follow LToN these days.

Expanded to 4 days
Another news is that LToN expands to 4 days this year. There will be a 3.5 km long prologue in the centre of Halden in the afternoon, Thursday 17. August. This is the same course as in the first edition 4 years ago. 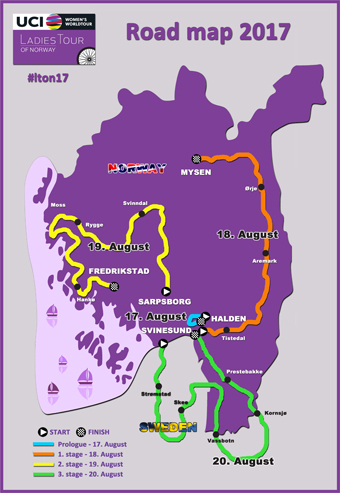 This will succeeded by three road race stages of various difficulty.
Friday the riders take off in Halden and follow the lakes of Haldenvassdraget north to Ørje. From there turning west to Mysen, tackling three technical laps before crossing the finishing line. Norway’s Prime Minister Erna Solberg will watch the race this day.
Østfold’s biggest city Fredrikstad, celebrating its 450 years anniversary this year, is the finishing town of Saturday’s stage. The start is at the very beautiful Hafslund Manor in Sarpsborg. From here the riders first go north to Svinndal and continue to Råde and Rygge before hitting the coastline down to Fredrikstad, with the finising line at the bank of the river Glomma.
Sunday’s stage is the “Queen Stage” with several crossings between Norway and Sweden. After the start at Svinesund the riders pass through the coastal town of Strömstad in Sweden before they go inland and cross the border into Norway again at Enningdalen.
Then another lap into Sweden, including a new part of 7 km gravel road before the last border crossing at Kornsjø. Both in Halden and Fredrikstad there will be three final laps in the city.

Want the people out
The organizers encourage the people in Østfold to get out in numbers and make this a big party, as the Norwegians normally do at big sporting events. This is a rare opportunity to see the best female riders in the world at close range.

In all three previous editions, the general classification winners have all been world stars. 2016 Olympic champion Anna van der Breggen won the first edition in 2014, US champion Megan Guarnier won in 2015 and former Dutch champion Lucinda Brand is the reigning champion from 2016.

In the women’s World Tour we will also see the Norwegian team Hitec Products. One of their riders is the local hope Emilie Moberg of Halden, who has had a great season so far this year.