Katrin Garfoot hangs up her wheels

Last years 4th. in the Ladies Tour of Norway and the silver medalist from the World Championships in Bergen, the 36 year old Australian Katrin Garfoot has decided to stop her career as from now.
She came late into cycling and startet first as a 29 year old athlete. But she has had a lot of great results in short time, and at the WCH in Bergen she was only beaten by Dutch winner Chantal Blaak in the roadrace. 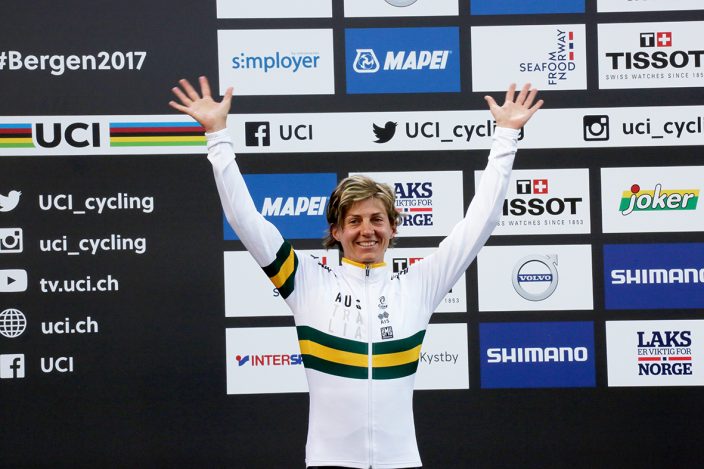 WCH-silver in the road race and bronze in the TT-race was the result for the then 35 year old Katrin Garfoot during the 2017 WCH in Bergen, Norway. Here she is celebrating her silver after the road race. Photo/rights: MARCELA HAVLOVA/KEK-stock

Beside the silver she also won the bronze in the TT-race, a distance she has won three times at the Australian championships. She also won the TT-gold at the Commonwealth Gamens in April this year.
– I’m happy with my journey over the last years. I’ll thank all who have been involved and all who have supported me, said Garfoot at a press conference with Cycling Australia.
– After the Commonwealth Games I wished to see if life would pick me up. And it has done. I didn’t feel like training again. My cycling career has been a very intens time for me and now I want to enjoy life with my friends and family.

Katrin Garfoot says she doesn’t really know what to do in the future, but she wants some time to think about different options for the time to come.
She has been riding for Orica since 2014 when the teams name was Orica-AIS. This year it’s Mitchelton-Scott. Garfoot has achieved very much in the few years she has been a professional rider.
And she also impressed in the last edition of the Ladies Tour of Norway. She started with a top-3 already on the prologue and went on to finish 4th on GC in the race where Marianne Vos won overall.