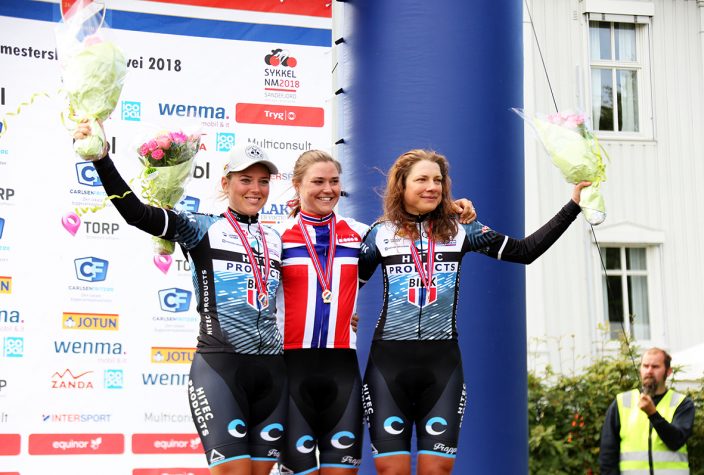 LINE MARIE GULLIKSEN (middle) with the Norwegian champion jersey after the time trial. She had an 11th place as her best result from before. Hitec Products-Birk Sport won all the medals. Thea Thorsen (left) won the silver and last years champion Vita Heine (right) had to settle for bronze this time. Photo/rights: INKA JULIA KRISTIANSEN/KEK-stock

Gulliksen had never been better than 11th. in the TT at the Norwegian championships, but she has been in good shape this year, and she posted a solid time from an early start number. The tough and quite windy course was hard and Gulliksen’s time showed up to be hard to beat. At the end it was still the best time and gave her the gold medal.
She stod on the top of the podium with her two team mates Thea Thorsen in second and last year’s champion Vita Heine in third. Thorsen hoped for gold, but had to settle for second as last year. Heine was not able to defend her TT-title from last year.

Susanne won solo
Susanne Andersen did the same as year ago when she went away and won the criterium on Friday evening in Sandefjord. The youngster from Stavanger – who was 7th at the WCH road race in Bergen last September – got a gap on the two final laps and did never let the others come up again.
The other Hitec-girls covered all the attempts to catch Susanne and in the sprint it was her colleague Ingvild Gåskjenn who grabbed the silver ahead of Stina Borgli, the best non-professional in the race. 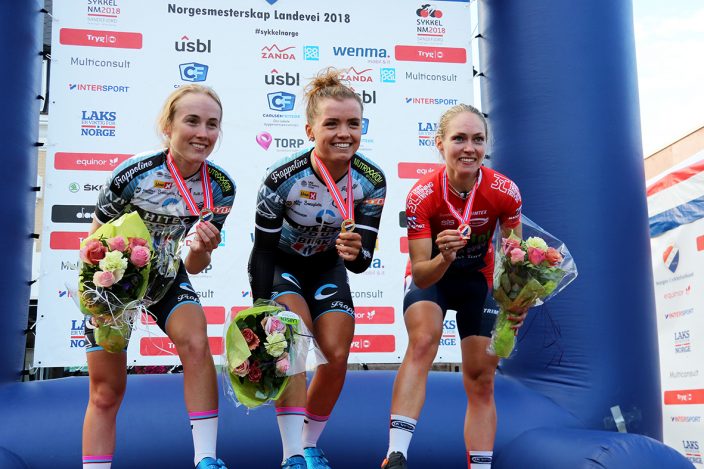 Vita defended the road race
In Sundays road race nobody could follow Vita Heine. The ex-Latvian rider went away halfway through with Katrine Aalerud (Team Virtu) and they worked good together. The gap was growing, but at the end Aalerud couldn’t follow anymore.
She has had a terrible season with crash, injuries and in the TT-race here she got a puncture after only 1 (!) minute of riding. But she finished her first race of the season and was awarded as the most offensive rider. Team mate Emilie Moberg got cramp in her legs on the two last laps and could not take over when Aalerud faded.
Instead it was once again Hitec Products-Birk Sport who were sitting with all the cards at the end. Susanne Andersen sprinted home the silver medal, while Stine Borgli managed another bronze. But none got close to the Norwegian champion Vita Heine! 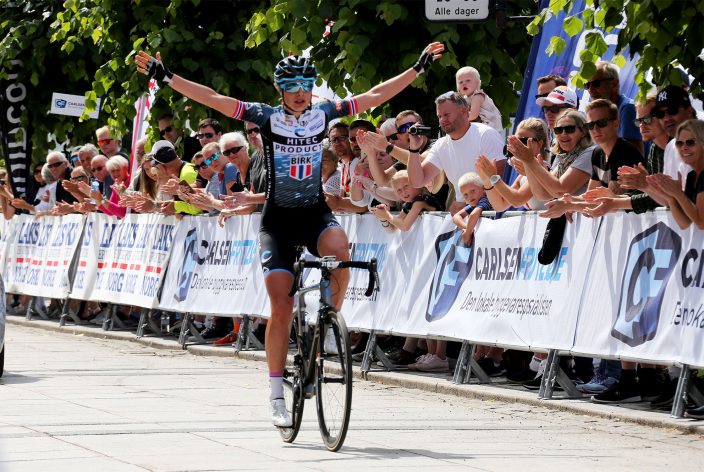 VITA HEINE (Hitec Products-Birk Sport) celebrating another gold medal at the Norwegian championships. She was in a class of her own in the road race after Katrine Aalerud (Team Virtu) lost contact. Photo/rights: INKA JULIA KRISTIANSEN/KEK-stock 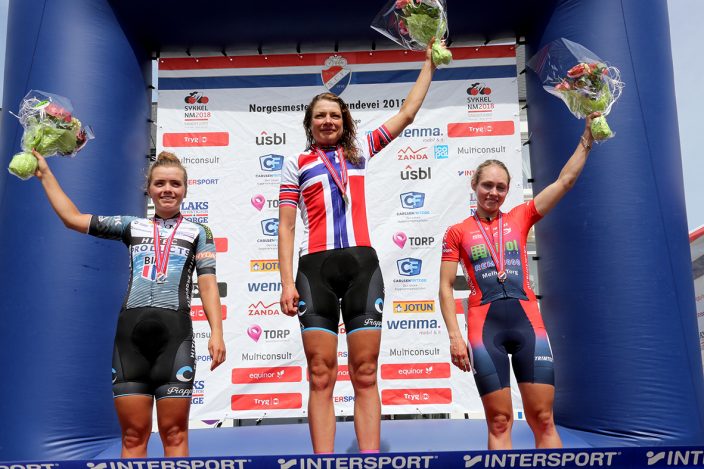