Here are the favourites for Ladies Tour of Norway

Will the Norwegian ladies be able to fight for the victory in this years Ladies Tour of Norway? Several of the best women in the world are coming to LToN 2016 in the days 12-14 of August for the third edition of Norways biggest stagerace for ladies.

Hitec Products of the Norway are starting with 5 Norwegians among the 6 riders in the team. Sprinter Emilie Moberg of Halden is the local hope and she was third on the last stage in 2015.
Two interesting starters are the juniors Susanne Andersson and Ingvild Gåskjenn in the Norwegian national team. Susanne was 5th at the Junior World Championships last year and is probably Norway’s biggest talent for a long time.

Strong sprinters
– We can say that the best climbers are in Rio for the Olympics, but the best sprinters will race the Ladies Tour of Norway, says race director Roy Moberg and thinks about both the gold- and silvermedalist from the Olympics. Anna van der Breggen and Emma Johansson both raced LToN last year, and van der Breggen won the event in the first edition in 2014.
The sprinters challenging the local hope Moberg in the sprints in Fredrikstad, Sarpsborg and Halden are first of all Nina Kessler, Carmen Small, Joelle Numainville and this years Belgian champion Kaat Hannes.
There are also other favourties if the races are not coming down to final sprints. Riders like Sara Gillow, Doris Schweizer, Lauren Kitchen, Cecilie Ludwig Uttrup, Oksana Kozunchuk and others can also make an impact on the results.

Using the ”whole” of Østfold
Ladies Tour of Norway will start with a 71,1 km stage between Halden and Fredrikstad on Friday. The second stage on Saturday will take the riders from Mysen to Sarpsborg, a stage of 96 km. Sundays last stage is also the hardest. It starts at Nordby Shopping Center on the Swedish side of the border and ends in Halden after 115,8 tough kilometers where the riders are crossing the border between Norway and Sweden several times.
Newly crowned Olympic champion Anna van der Breggen from the Netherlands won the first edition of LToN in 2014, and last year it was the American champion Megan Guarnier who won the GC.
This is the first time the organizers use the ”whole” region of Østfold. Ladies Tour of Norway have earlier had Halden as the base for all the stages. 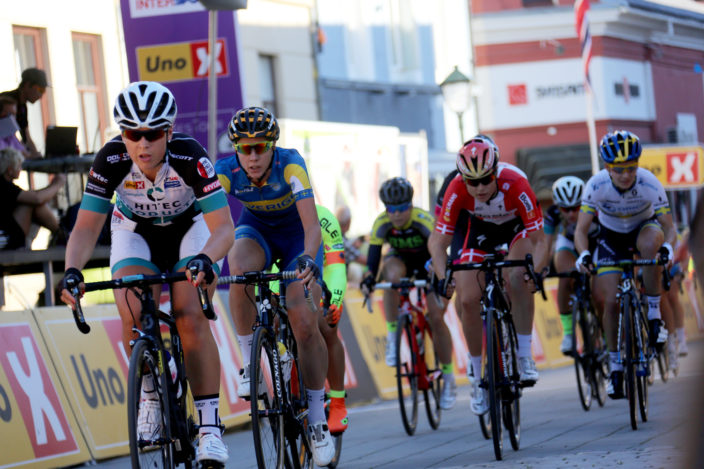 Ladies Tour of Norway will start again on Friday with the third edition of the race. Here from last year with Thea Thorsen (Hitec Products) at the front. Photo: MARCELA HAVLOVA/sweski.com

THE FAVOURITES FOR LADIES TOUR OF NORWAY 2016

RABO-LIV (HOL)
Even without Marianne Vos and the Olympic champion Anna van der Breggen the World’s no 1 ladies team have several favourites for this years race. Experienced Sara Gillow of Australia won the silver at the Australian TT-championships and she is a 4 times winner of the Oceanic championships.
Rabo-Liv will also start the 22 year old Thalita De Jong and Anouska Koster, two of the most talented Dutch girls. Koster is this years Dutch champion and De Jong won the 9th stage of Giro d’Italia this year.

CERVELO-BIGLA (SUI)
Despite only four riders on the start the Swiss top team have strong names. Experienced Joelle Numainville of Canada was 4th in this years Le Course and the 28 years old is a national champion from both 2013 and 2015.
Nicole Hanselmann has two silver medals from the Swiss championships this year and the 20 years old Clara Koppenburg from Germany is a big talent.

CYLANCE PRO CYCLING (USA)
A new team this year, unfortunally without the veteran Shelley Olds, winner of two stages last year, and the climber Rosella Ratto, both being injuried. But they have put the strong springer Carmen Small into the team.
Even the double Swiss champion Doris Schweizer and the attack rider Alison Tetric from USA will start for Cylance.

HITEC PRODUCTS (NOR)
Will the Norwegian pros make it at home? Emilie Moberg of Halden was third on the last stage in 2015 and she has been on the podium at international competitions also this year. In the team also last years Norwegian champion Miriam Bjørnsrud and the TT-specialist Cecilie Gotaas Johnsen.
The only non-Norwegian rider in the team is the experienced Lauren Kitchen from Australia – a strong allrounder, who will be important for the team.

TEAM SWABO LADIES (HOL)
Not in the highest division and normally not in the fight for the victory. But 18 years old Norwegian Malin Eriksen and 21 years old Swede Hanna Helamb are interesting starters on home roads.

TEAM MAXX-SOLAR (GER)
The German team took part in LToN also last year. The most known rider is 33 years old Beate Zanner, winner of the German cup this year. Lisa Fischer is a former German champion on the track and Benita Wesselhoft has won the German cup in cyclocross this year.

BMS BIRN (DEN)
A Danish team on the way up and a team who can surprise. Cecilie Uttrup Ludwig is only 20 years, but she won the Tour de Freminin in the Czech Republic this year. Both Pernille Mathiesen and Christina Malling Siggard have silver from the Junior World Championships time trailing and 18 years old Simone Eg is this years Danish junior champ in TT. So this is a team to look out for.

TEAM CRESCENT D.A.R.E (SWE)
A team with Swedish and Danish riders, not really at a professional level. Will normally not be a treath for the best places but there are riders who can post a surprise. Best chance for Trine Schmidt.

PODIUM AMBITION PRO CYCLING (GBR)
Interesting team from Great Britain with the 42 (!) years old Sharon Laws as the iron lady. She won the Brittish championships in 2012 ahead of last years World champion Elizabeth Armistead…!!! Claire Rose won the silver at this years Brittish TT-championships and was third in the GC at the Tour de Bretagne.

DROPS CYCLING TEAM (GBR)
Also a Brittish team, but not with the same results this year as the Podium Ambition Pro Cycling and none of the riders have any international topresults this year.

LENZWORLD-ZANNATA ETIXX (BEL)
The Belgian team will probably fight in the top. Sprinter Nina Kessler was second at Ride London among the best in the world and she also won the first stage of the BeNe Tour this season.
Kaat Hannes is this years Belgian champion and has a good finish as well.
Oksana Kozonchuk was third at the Russion championships this year.

NORWAY NATIONAL TEAM (NOR)
Promissing juniors Susanne Andersen and Ingvild Gåskjenn will start for the Norwegian national team. Susanne was 5th at the JWCH last year and she has posted several top results among the juniors also this year.
Ingvild is also a rider who wants to show herself among the seniors.

SWEDEN NATIONAL TEAM (SWE)
Interesting team where the experienced pro Sara Mustonen is coming directly from the Olympics in Rio. Also in the team is Sara Olsson, a professional rider in Italy. Other strong riders are Sara Penton and Alexandra Nessemar. Emilia Fahlin was also planned to ride, but she didn’t have the power to do both the Olympics and LToN.

FINLAND NATIONAL TEAM (FIN)
Finland’s big star is Laura Lepistö (Bigla), but she is in Rio. The blue and white have a strong name in Sari Saarelainen who might make som results here.

CK VICTORIA (NOR)
A local team from Trondheim, but not among the hottest favourites. Names like Thrude Natholmen, Vibeke Dybwad and Berit Gjelten will tough have a chance to hang on for some good resultats.

BRYNE CK
Also a local team from Norway. 22 years old Katrine Aalerud has only been a top cyclist for three years, but she has done some good results for the Norwegian national team this year. Another talent in the team is Stine Borgli.

REGION SØR
Regional team with five ladies from Grimstad Sykkelklubb and one from Sandnes SK. Grimstad is the hometown of Thor Hushovd and Dag-Otto Lauritzen. Some of the ladies have been riding the LToN before, but without any results.

REGION ØST
Also a regional team, starting with four ladies from different clubs in the Oslo region. Not a team with chances for the podiums.