Belgian champion Jolien D’Hoore (Wiggle High5) was the quickest in the finish at det 1st stage of the Ladies Tour of Norway between Halden and Mysen. The sprinter had full control in the slightly uphill finish and held off Gracie Elvin (Orica-Scott) and Christine Majerus (Boels-Dolmans). The bonus seconds also gave D’Hoore the yellow jersey as the GC leader. She took it from the prologue winner Ellen Van Dijk (Team Sunweb). 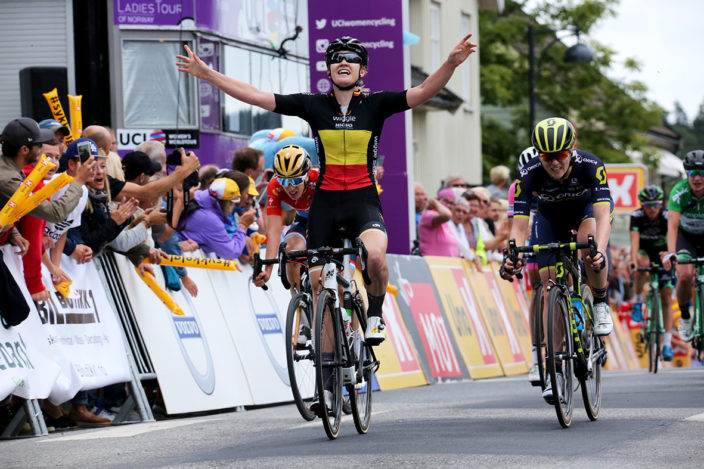 It was obivious that the big teams wanted to control the field after the tight prologue on Thursday evening. Even with several attempts to break away there was a big group coming to the final circuit of 3×6,3 km in Mysen.

The technical finish wasn’t enough to split the field and all the favourites were there when it was time to fight for the stage victory.

– My team did an excellent job and put me in the perfect position, says D’Hoore, who hade a good margin to second placed Gracie Elvin.

Top sprinters like Chloe Hosking (Alé Cipollini), Kirsten Wild (Cylance), Lotta Lepistö (Cervelo-Bigla) and others were there under the 1 km banner, but they were unaible to fight for the victory on the last meters.

It looked like Marianne Vos (WM3) should take the GC-lead. The Dutch superstar took bonus seconds on both the first sprints, but a 5th place on the stage saw D’Hoore snap the jersey by just 2 seconds from Vos.

Prologue winner Van Dijk dropped to third, sitting 6 seconds from the lead. The race is still wide open in front of Saturdays 113 km long stage between Sarpsborg and Fredrikstad. It’s also a stage that could end in a massprint.

Marianne Vos took the green points jersey, while Rosella Ratto (Cylance) is the leader in the KOM-competition. German champion Lisa Klein (Cervelo-Bigla) is the best young rider. Emilie Moberg (Hitec Products) was the best Norwegian on the stage with a 9th place