Canyon-SRAM in an outsider

The teams in LToN 2018 : Canyon-SRAM in an outsider

German registered team Canyon-SRAM is one of the outsiders in this years LToN. The team have both young and older riders and so far this year they’ve won 12 races. A very exciting starter is newcomer Katarzyna Niewiadoma, the Polish start who helped Marianne Vos to the overall victory for WM3 last year – but this team is not in the peloton anymore.

Niewiadoma has taken the teams only WWT-victory in 2018. She won the Trofeo Alfredo Binda in Italy. This is her only win of the season.

The most winning rider at Canyon-SRAM is Brittish sprinter Hannah Barnes. She has 4 victories in 2018, but she will probably not start in Norway. This makes the teams sprint chances less strong than if Barnes should have been there. 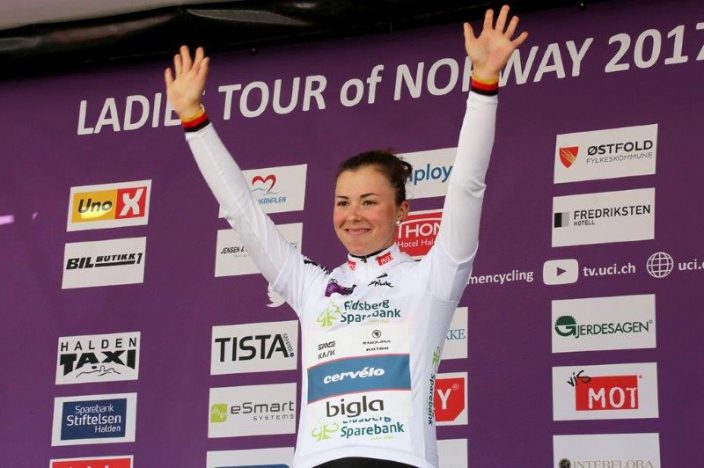 The young German rider Lisa Klein won the best young riders jersey in last years LToN when she also was the German champion. Klein has one victory this year, it was the prologue in Festival Elsa Jacobs in Luxembourg. The 22 year old has changed team from Cervélo-Bigla to Canyon-SRAM this year. She was also 2nd overall in the BeNe Ladies Tour in July, where she also won the best young riders jersey. The big talent won a silver at the TT-race in the U23-ECH in the Czech Republic and she got the bronze medal in the German TT-championships.
Canyon-SRAM was 4th in last Saturdays TTT in Vårgårda, Sweden. This shows the power in the team.

The experience in the team is Trixi Worrack, the 36 year old German who has ”always” been there in the professional peloton. She won the time trial in the BeNe Ladies Tour this year and Worrack has more than 10 years in the worlds elite. In her long career she has silver from the WCH back in 2006, two German championships (2013 and 2015) and she was 4th at WCH as early as in 2004. Trixi Worrack is still holding a high level and she won silver at the German TT-championships this year. This is her third year at Canyon-SRAM.