More and more nations are coming to the Ladies Tour of Norway now when the race is a part of the Womens World Tour. BTC Ljubljana will be the first team from Slovenia in the race and they are bringing several strong riders.
One of the stars is the Swedish shooting star Hanna Nilsson who won the most aggressive riders jersey at the WCH in Bergen, Norway last September. 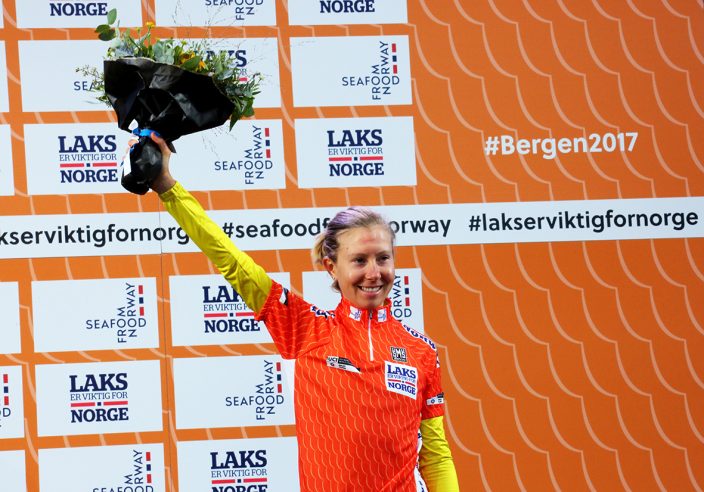 HANNA NILSSON of Sweden is one of the stars in the team. Here she is celebrating in the ”Salmon jersey” as the most aggressive rider during the World Championships in Bergen, Norway last September. Photo: MARCELA HAVLOVA/KEK-stock

26 year old Nilsson won the so called Salomon jersey as the most offensive rider in Bergen, where she ended up as number 36. But Hanna has taken big steps over the last two-three years, and she is now riding her second season with the BTC Ljubljana squad after having been half a year at Lensworld–Zannata.
Hanna Nilsson also won the bronze medal at the Swedis road championships both in 2015 and 2017. Now she’s hunting her first big professional victory and what would be better than if it comes in LToN in August?

The big Slovenian star in the team is Eugenia Bujak, this year’s Slovenian TT-champion. The 28 year old has been with the same team since she turned professional in 2014, and she has several big wins on her CV.
Among these are two stages of the La Route de France in 2016, the same year she also won the GP de Plouay-Bretagne. The year before she also won one stage of the Thüringen Rundfahrt in Germany. This year she was 4th overall in the same race.

Another rider to watch out for is the big Dutch talent Maike Boogaard. She is only 19 years and a former Dutch junior champion. She was riding the TTT at the World Championships in Bergen already last year. 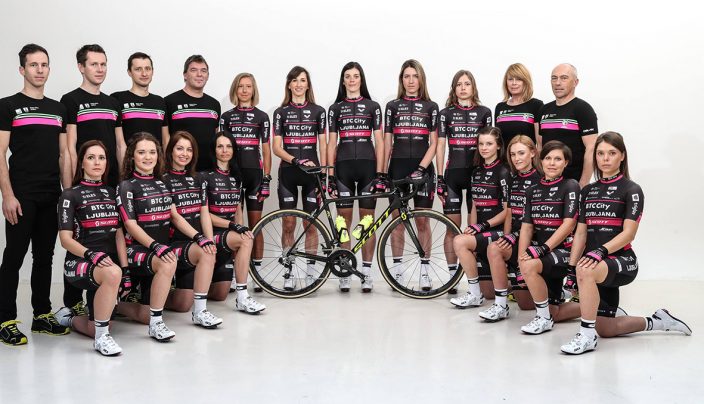 BTC LJUBLJANA will be the first Slovenian team in the Ladies Tour of Norway. It’s a strong team with a lot of top riders from different nations. Photo: BTC LJUBLJANA TEAM

The BTC Ljubljana squad has riders from both Slovenia, Holland, Russia, Germany, Sweden, Azerbaijan and Croatia.