Four riders had nearly 30 seconds lead on the last 7,4 km lap in the center of Fredrikstad when a sudden bridge-opening suddenly stopped the whole race and destroyed the final on the 2nd stage of the Ladies Tour of Norway, 140 km between Sarpsborg and Fredrikstad.
A very unlucky episode, but there was anyway a tough sprint where Chloe Hoskings (Alé-Cipollini) just edged out Marianne Vos (WM3) to take the stage. Vos took the yellow jersey. 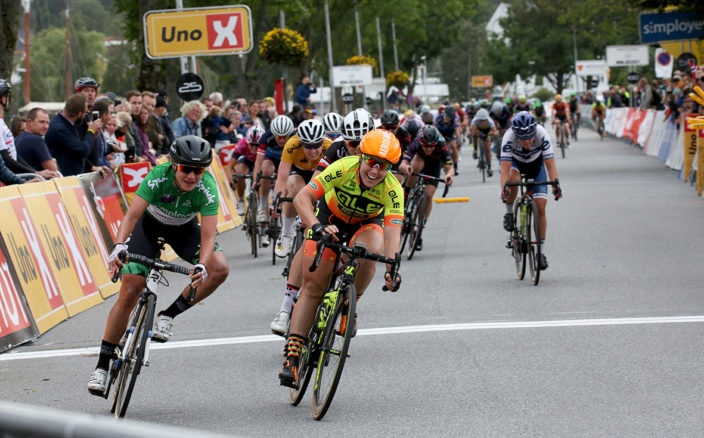 PHOTO: CHLOE HOSKINGS (Alé-Cipollini) wins the sprint a few centimeters ahead of Marianne Vos (WM3), who took over the yellow jersey as the overall leader. Photo: MARCELA HAVLOVA/sweksi.com

The reason for the unexpected opening of the bridge is accorinding to the race directors several unlucky happenings. The bridge is opened automaticlly from an office in Oslo. The boats are calling a number to open it, but because of the race the bridge was closed till 18,00 o’clock.
Todays stage was slower than expected because of a lot of wing. 15 seconds past 18,00 the riders came to the bridge for the last time and they got the red light and had to stop. The reason is obviously that there was a new person on the office in Oslo controlling the bridge, and he hadn’t got the information about the race and nobody checked the live videos from the bridge.

Lost the lead
The four leading riders had a gap of less than 30 seconds and the commisaires did use the rules and let everybody start together again for the last 5 kilometers.
The four leading riders at this point were Katarzyna Pawlowska (Boels-Doelmans), Mieke Kröger (Canyon SRAM), Leah Kirchmann (Team Sunweb) and Rosella Ratto (Cylance).
Kröger was a treath to the overall lead and she now lost the chance to be in the yellow jersey after two stages.

Instead it was the big sprinters who used the last 5 kilometers to fight it out for the stage win. Chloe Hoskings was brought to a perfect position on the final straight and could just edge out Marianne Vos, who had been active the whole way and was already in the overall lead.
Prologue winner Ellen Van Dijk (Team Sunweb) was third and is still in the fight for the total victory.

In the climbing competition Jannecke Ensing (Alé-Cipollini) took the polkadot jersy, but Rosella Ratto has equal points in front of Sundays final stage. The German champion Lisa Klein (Cervelo-Bigla) kept the lead in the best young rider competition while Susanne Andersen (Hitec Products) is still the best Norwegian rider. Most aggresive rider was voted Italian Silvia Valchecchi (Bepink-Cogeas) after a long solobreak early on the stage.

Marianne Vos is also leading the fight for the green points jersey.