Bepink from Italy might be one of the smallest teams in this years Ladies Tour of Norway after the team was divided in two from the sponsors Bepink-Cogeas to Bepink and Cogeas-Mettler this season.
The team doesn’t have the biggest stars, but they were maybe the most aggressive riders at last years LToN and they have just captured the Slovakian national champions jersey to the team. 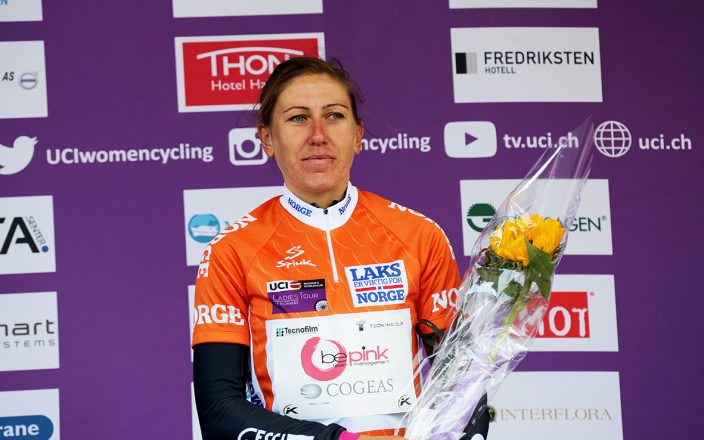 SILVIA VALSECCHI (Bepink-Cogeas) with the ”Salmon jersey” as the most aggressive rider on Stage 2 between Sarpsborg and Fredrikstad in last years LToN. Photo/rights: MARCELA HAVLOVA/KEK-stock

The 35 year old veteran Silvia Valsecchi got the ”Salmon jersey” as the most aggressive rider at last years second stage between Sarpsborg and Fredrikstad. She is still one of the most experienced and stabile riders of the team. Valsecchi has a silver from the Italian championships both in the road race (2012) and the individual time trial (2011).

Three riders who went away
Last year Bepink-Cogeas also got the most aggressive rider on stage 1 between Halden and Mysen. But Ilaria Sanguineti who won it has changed to Valcar PBM, a team also coming to this years LToN.
Gone is also the super veteran Olga Zabelinskaya. The 38 year old Russian followed the other sponsor when the team split and she is now racing for Cogeas-Mettler.
The always smiling Canadian Alison Jackson was the best of the Bepink-riders in last years edition of LToN, but she is now racing for the US team Tibco-SVB, also cleared for this years LToN i August. Jackson is by the way from the small town of Vermillion, Alberta – the same place as the Olympic skiing champion Beckie Scott.

Slovakian champion in the team
22 year old Tereza Medvedova did exactly the same as Peter Sagan a few days ago: She won the Slovakian champions jersey, which we hopefully will see in this years LToN. It was finally a title for Medvedova who has a silver from 2015 and also won the bronze in 2016 and 2017.
The Bepink team was also close to the Czech champions jersey. Nikola Noskova – who won in 2017 – was second, just one second behind Jermila Machatova from Dukla Praha.

New talents this year
Several of the Bepink-riders are also very good track cyclists. Siliva Valsecchi is one of them, another is Francesca Pattaro.
New in the team is the 19 year old Letizia Borghesi who is coming from Serviette Giusta and 20 year old Lisa Mordent from Astana. She was racing the individual TT at the World Championships in Bergen, Norway last September, ending 24th.