A lot of national champions in LToN

There will be a lot of national champions jerseys in this years Ladies Tour of Norway. Most of the countries have now had their nationals, and it looks like several of the winners will be seen on the roads in Norway in August.

TWO WORLD CHAMPIONS. Amalie Dideriksen (left) lost her WCH jersey in Bergen where she was third. But now she got the Danish champions jersey. Team mate Chantal Blaak has taken over the WCH jersey, but she also won the Dutch championships again. Photo/rights: MARCELA HAVLOVA/KEK-stock

”Worst” is the world’s best team, Dutch outfit Boels-Dolmans. The two World Champions Amalie Dideriksen and Chantal Blaak won in Denmark and the Netherlands. But Blaak will wear her World Champions jersey that she won in Bergen last September. Boels-Dolmans also have the jersey from Luxembourg where Christine Majerus defended her title from last year.

We might also see the Swedish champions jersey. In our neighbour country it was Emilia Fahlin (Wiggle High5) who won the championships and she took part in the LToN also last year. But it was a little surprise that triathlon star Lisa Nordén won the TT-gold in Sweden.

Here are most of the national champions in 2018: 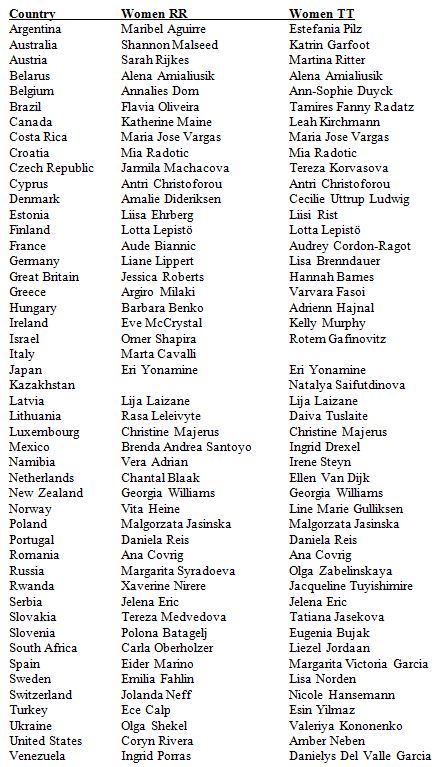 DAIVA TUSLAITE won the border sprint at the last stage in LToN 2017 in the Lithuanian champions jersey. This year she won the TT-gold in her home country. Photo/rights: MARCELA HAVLOVA/KEK-stock

ERI YONAMINE (FDJ) won both the races at the Japanese championships and will hopefully come back to Norway and LToN. Photo/rights: MARCELA HAVLOVA/KEK-stock

CHRISTINE MAJERUS (Boels-Dolmans) is one of three national champions in the world’s best team. She defended her jersey in Luxembourg. Photo/rights: MARCELA HAVLOVA/KEK-stock